Walking robots have always fascinated me. With LEGO, the limit is usually the number of motors you can add or the weight of all the battery boxes. With Servo Spider, I made a walker that is both light and has eight motors. In this article, you’ll learn how to build the MINDSTORMS Servo Spider, what parts you need, and how the code works.

But first, let’s have a look at how the Servo Spider walks in practice. Here is a short movie about the end result. Note how the legs move forward quickly and backward slowly. Note also the order in which the legs do their up and forward movement.

Collecting the parts for the Servo Spider project 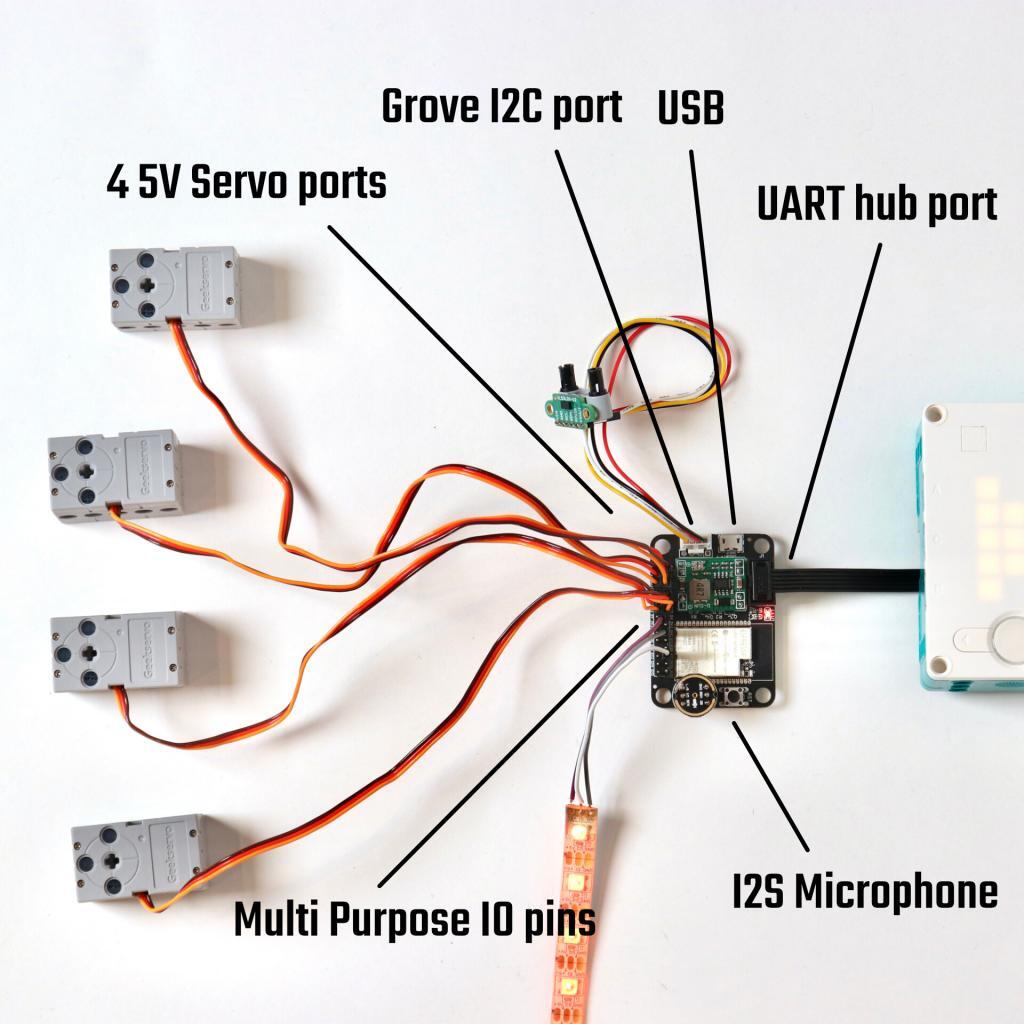 This all-new MicroPython expansion board for LEGO MINDSTORMS Robot Inventor, Spike Prime, and EV3 is even more powerful than the last Wifi Board. You can easily connect this LMS-ESP32-v1.0 board to your LEGO robot and use it as an interface to a limitless range of third-party electronics. You can now connect any protoco…

An experienced builder can probably assemble the spider based on the pictures below. The model is relatively simple. You plug the motors and servos in their respective corners on the hub.

Not that in my build, I flipped the servos upside down on the left side of the build! Look carefully where the tiny screws are. I flipped them because I want a positive angular position to be forward, regardless of the servo position.

If you want instructions, you can find them on my Patreon site. The instructions are a Patreon exclusive and not for sale on this website.

There are four challenges to making the spider walk.

In the past, I have created a lot of code and reusable Python Classes for precisely this situation. To make things easy for you and myself, I have collected all of these classes in an installable library: mpy-robot-tools.

To download it to your MINDSTORMS hub, run the installer script once. Just paste inside an empty python project in the official LEGO app. After that, the classes will be available to you until you run a firmware update.

To make the legs move in sync, we will be using three Classes: Mechanism, AMHTimer, and PBMotor.

PBMotor is a wrapper around the MINDSTORMS motor classes. I called it PBMotor because it follows the Pybricks nomenclature and motor behavior. That behavior is universal and well-built. On the other hand, the LEGO terminology is all over the place: it is different on Robot Inventor, Spike Prime, and on the REPL.

Instancing a motor with PBMotor is simple: motor_a = PBMotor('A'). This will also reset the relative encoder to the absolute zero. If you don’t pass it a port name, PBMotor will create a stub for you: servo_stub = PBMotor('servo'). This is handy for our servos because you can set and read angles, but it doesn’t change any voltages on the hub. The stub is also handy for testing purposes.

The Mechanism() class calculates all motor angles and drives the motors. To calculate the angles, the Mechanism needs a timer: AMHTimer(). AMHTimer generates 1000 ticks per second by default. But it is more powerful than that: you can change the rate and acceleration of time. One practical application is that you can ‘advance time’ to move the robot forward and the ‘reverse time’ to make the robot go backward.

Defining the leg keyframes for the MINDSTORMS Servo Spider

The spider only has two animations: moving a leg forward and backward, and lifting a leg. We can create the entire walking cycle by flipping these animations around and offsetting them for the different legs. I choose to have a base cycle of 2500ms. In that cycle, the leg is on the ground for 2000ms and in the air for 500ms. While on the ground, it pushes the spider forward slowly. In the air, the leg quickly returns to its forward position. I defined the motions for upper and lower legs as below:

Once we have the keyframes for one leg, we can flip and offset them for the other legs, using the keyword arguments in linerar_interpolation:

Finally, we can start the timer and the control loop to calculate all interpolated motor positions:

But there is a catch. We still need to tell the LMS-ESP32 board to set servo positions.

Uartremote: the symmetrical form of UART communication between embedded systems

It drove me crazy to program handshakes and message acknowledgments over serial communication time and again. That’s why I created a library with Ste7an to standardize it once and for all.

The simplest way to deploy that library is to create a listener and a caller. In the case of the spider, I made the LMS-ESP32 board the listener. The listener registers a command, set_angles, and starts a listening loop. I put a class around the set_angles method so this script will remember the Servo() instantiations, and also make new instances when necessary.

The caller just calls the listener with the command name and a parameter. In this case, I chose to use a dictionary as the parameter. The dictionary contains the servo pins and the required angles. So now, all we have to do is add this line of code inside the main control loop on the LEGO side.

Note that mpy-robot-tools works on both the LMS-ESP32 board and the MINDSTORMS hub. In this case, I made a simple Servo() class that converts angles to hobby servo PWM.

Thanks to the underlying classes, I’m happy that the main program is abstract and easy to read. You can now easily play around with timing and motor angles.

Next steps for the MINDSTORMS Servo Spider

My next challenge is to make the spider turn and walk backward, and I would like it to handle rougher terrain. To build this, I will employ the Bluetooth remote control classes in the mpy-robot-tools. Be sure to subscribe to my YouTube channel and follow my Facebook page if you’re interested in the follow-up.

Do you enjoy mpy-robot-tools? Help more people enjoy it!

I test and expand the library all the time. But I think the project would become even better if you could help document it. This way more people can enjoy it. And maybe you can add some more tools to the library. So please fork and make pull requests!

Hook up any i2c sensor, hobby servo, and more to your LEGO robot with the ESP32 board

US and Canada Shop

I’m a proud member of the top builders of the Robotmak3rs Recognized Online Community.

All of the work on this website is licensed under a Creative Commons Attribution-NonCommercial-ShareAlike 4.0 International License. This means: please make your own version, but give credits to me and my site. And don’t make money with my designs.

I try to track as little as possible, but I have Google Analytics turned on. Here are the links to our Terms and conditions (including Delivery policy and The legal mentions) and Privacy policy.